If you have key employees you want to retain for the long term, you may wish to consider implementing an executive benefit program that will help to protect their financial future, while protecting your company with a solution that can help to ensure their loyalty for years to come.

Is this strategy right for you? You may wish to consider implementing this technique if your business:

Wishes to provide a retirement benefit that helps to compensate the selected key employees for the “reverse discrimination” they are subject to by qualified plan limitations, and one that will help to ensure that they remain with your company for the long term. 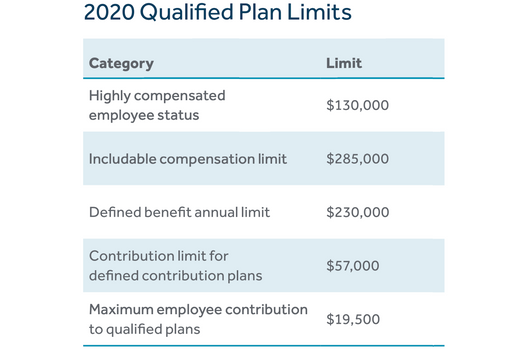 Why your top performers may be worried about their financial future

Highly compensated employees often share a common problem: government-imposed caps on qualified plan contributions make it hard for them to save enough for retirement. And, if they participate in a defined benefit plan, those same rules can make it hard for them to qualify for a high enough pension benefit to support their lifestyle when they are no longer working. This is often referred to as “reverse discrimination.” 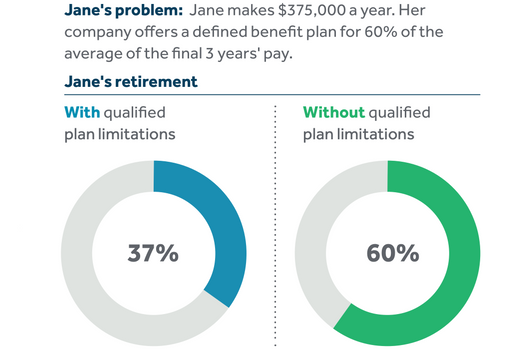 The table above shows how qualified plan limits can result in a form of reverse discrimination for highly compensated individuals. The graphic on the left shows you how much retirement income a hypothetical key employee, Jane, could lose out on with respect to retirement income due to these limits.

Jane’s company offers a defined benefit pension plan that provides a benefit equal to 60% of her average compensation during her last three years of employment before retirement. Jane earns $375,000. The problem? Due to the IRS’s $230,000 limit on compensation that can be considered for defined benefit plan participants, Jane will receive just $138,000 per year in retirement (60% of $230,000) rather than $225,500 (60% of her actual salary of $375,000). That means Jane will wind up with a monthly benefit that is only 37% of her average pre-retirement earnings, rather than 60%.

One executive benefit program that many business owners have found can help key employees overcome the effects of reverse discrimination is a Supplemental Executive Retirement Plan (SERP). With a SERP, your business can recruit, retain, reward, and retire a select group of key employees. And a SERP can be designed to provide pre-retirement death benefits, post-retirement income, or both. For your key employees, a SERP can be used along with, or in lieu of, a qualified retirement plan. 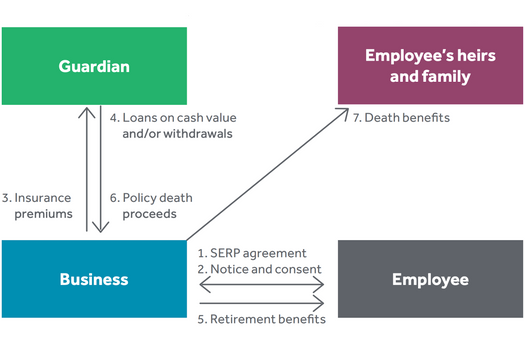 How a SERP works 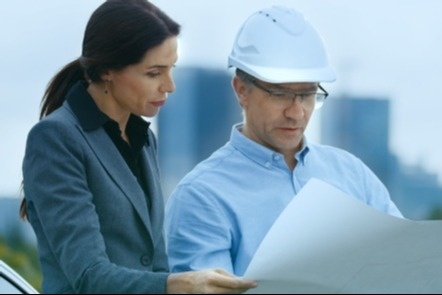 The following hypothetical case study illustrates how a successful construction company used a Supplemental Executive Retirement Plan to help provide long-term financial incentives to one of its most valuable employees, giving him incentives to remain loyal to the company for years to come.

Allerdyce Construction is a successful, privately held construction firm with stable earnings and 30 years in the business. Ben Rolf is the VP of Project Management, overseeing all the company’s current construction projects. He is an outstanding performer, and uses his experience to enforce and meet tight timelines that ultimately save Allerdyce a lot of money. 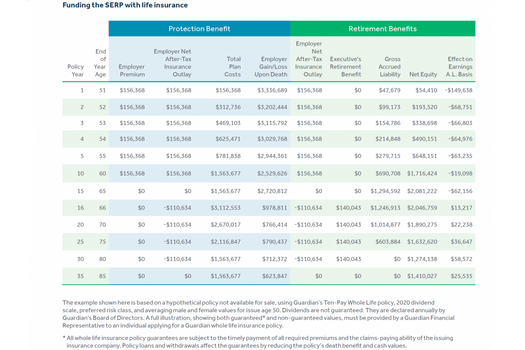 Allerdyce currently offers all its employees a 401(k) plan, as well as a legacy defined benefit pension plan. Under the defined benefit plan, Allerdyce pays 65% of the final three years’ salary as a retirement benefit. But Ben makes $375,000 a year, and due to government-imposed qualified plan limitations, Allerdyce can only consider $230,000 of his income in the pension benefit calculation formula. Consequently, his pension benefit would be $150,000 at most — only about 40% of his current salary.

To solve this problem, Allerdyce’s Guardian representative recommends a Supplemental Executive Retirement Plan to “overlay” the defined benefit retirement plan. The SERP is designed to provide an additional 40% of Ben’s final three years’ average salary in retirement, to replace the amount lost due to the IRS cap.

At retirement, Ben’s final three-year salary average is projected to be $400,000. As shown in the table, Ben will receive a retirement benefit of about $140,000 from the SERP for fifteen years. When added to the projected pension benefit, his total retirement income is estimated to be $275,000 and the reverse discrimination problem is solved.

The advantages of funding SERPs with life insurance

Businesses that wish to informally fund their Supplemental Executive Retirement Plans have a number of investment options from which to choose. However, because most of these investments generate taxable income each year, many business owners look to permanent life insurance as a funding option. That’s because it does not have the same “tax drag,” as the policy cash value grows tax-deferred, so there is no need for business owners to be concerned about paying taxes on the buildup of the policy’s cash value.

Your business can purchase life insurance on the life of any participating employee to “informally” fund the plan’s future payments by using the policy’s cash value and to recover all of the plan costs at the employee’s death with the policy’s death benefit proceeds. A SERP informally funded with the proper amount of life insurance provides flexibility, while helping your business pay promised benefits and ultimately recover the cost of establishing the plan. It’s a cost-efficient way to provide a valuable executive benefit program.

Advantages for the employer

Your company can select the key employees who will participate — and can offer different participants different benefit levels.

You can customize the benefit

Your business can tailor the plan to meet your executives’ needs, and vary benefits and timing based on what is most appealing to each participating executive.

The life insurance policy grows tax-deferred and is listed as an asset in your corporation’s books. The death proceeds can be used to help recover plan costs.

Your business gets a tax deduction when it ultimately pays the benefit.

Advantages for your key employees

Their retirement benefits are supplemented

Your participating employee will receive an additional retirement benefit to make up for benefits they lost out on due to reverse discrimination.

The benefit will come within a reasonable time frame, compared to qualified pension plans or other benefits that aren’t accessible until retirement. 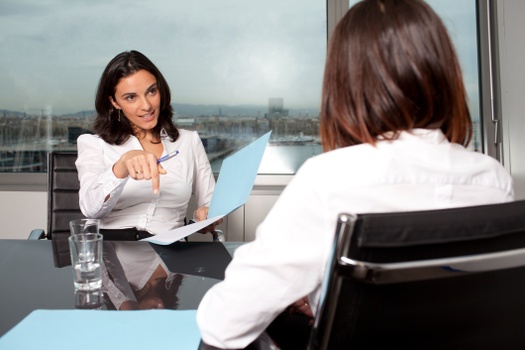 When a SERP is not ideal

SERPs aren’t ideal for all businesses. Your business should consider the possible disadvantages of this type of plan before implementing it. These include: 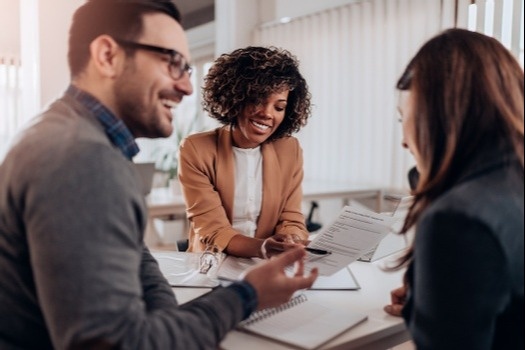 It’s always advisable to consult your tax advisor for guidance. Some general guidelines, however, that you may wish to keep in mind with respect to how insurance obtained to fund a SERP can affect the taxes of your business are these: 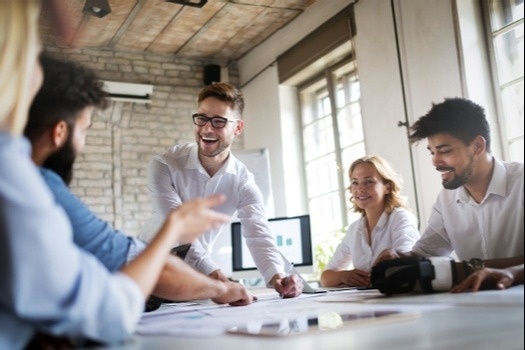 Protecting the income tax exclusion for the death benefit

In order to protect the income tax exclusion for the death benefit, there are four general requirements: 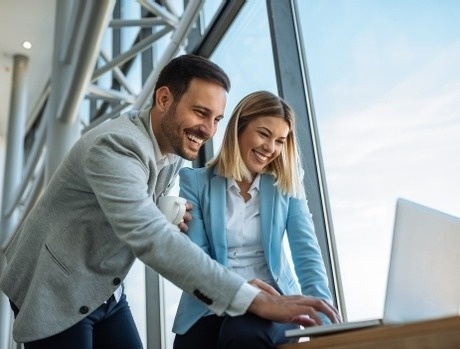 Compliance with IRS Section 409A

Your SERP must comply with Section 409A of the Internal Revenue Code. If it does not, plan participants could be subject to immediate income taxation, plus interest and a 20% excise tax on the plan-related income that the IRS deems to be taxable. 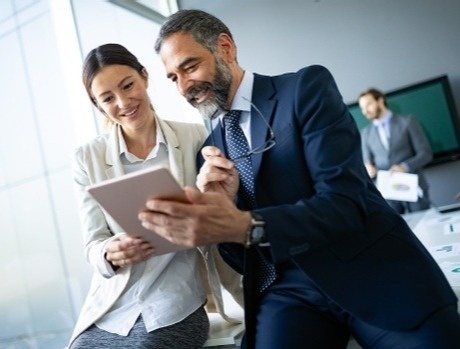 Keeping the plan exempt from ERISA

In order to ensure that your plan does not fall under the requirements of the Employee Retirement Income Security Act of 1974 (“ERISA”), you should make sure that your SERP qualifies for the so-called “top hat” plan exemption. Under this exemption, any plan that is “maintained by an employer primarily for the purpose of providing deferred compensation for a select group of management or highly compensated employees” is exempt from the participation, vesting, funding, and fiduciary responsibility rules of ERISA, but instead, is subject to the limited reporting and disclosure requirements of ERISA. 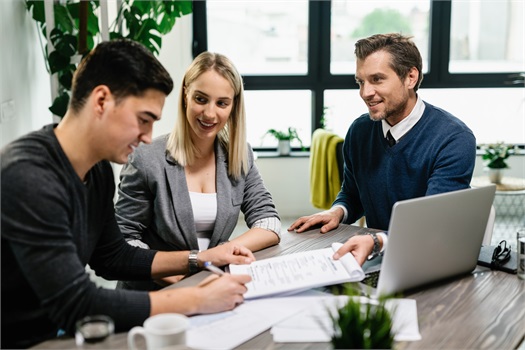 Time to Schedule a Review or Spend Some Time Examining Your Finances?

1 Policy benefits are reduced by any outstanding loan or loan interest and/or withdrawals. Dividends, if any, are affected by policy loans and loan interest. Withdrawals above the cost basis may result in taxable ordinary income. If the policy lapses, or is surrendered, any loans considered gain in the policy may be subject to ordinary income taxes. If the policy is a Modified Endowment Contract (MEC), loans are treated like withdrawals, but as gain first, subject to ordinary income taxes. If the policy owner is under age 59½, any taxable withdrawal may also be subject to a 10% tax penalty.
2 Guardian, its subsidiaries, agents, and employees do not provide tax, legal, or accounting advice. Consult your tax, legal, or accounting professional regarding your individual situation.
3 Employer-owned life insurance is received income tax free by the business only if IRC 101(j) is complied with.
All scenarios and names mentioned herein are purely fictional and have been created solely for educational purposes. Any resemblance to existing situations, persons, or fictional characters is coincidental. The information presented should not be used as the basis for any specific investment advice.